Scroll to the bottom for the audition sign up

​​The audition will consist of:

Auditions will involve cold readings with other auditionees in the group. No prep is required. Casting will ideally be completed by December 30th, with a January 5th read-thru and rehearsals to begin the next week(January 9th). Auditionees are asked to disclose all known evening/weekend conflicts between then and the run of the show on audition forms. Rehearsals will usually run Mon - Thu from 6:00 to 8:00. Tech week (week of 2/26-3/3) conflicts need to be made clear in advance, as attendance is going to need to be priority.

Living in the 1930’s, the Brewster sisters are legendary in their Brooklyn neighborhood for their kindness and generosity to all in need. They are friends to the local cops walking the beat, loving neighbors to the minister next door, and surrogate mothers to their nephews Teddy and Mortimer. But when slick, sophisticated, and newly engaged Mortimer discovers one of their “charities” involves poisoning elderly men to save them from living out their days in loneliness, he must find a way to stop their murder spree without turning them over to the police - a task that becomes more and more complicated with the return of his long-lost brother Jonathan, himself a prolific serial killer.

​
ROLE CONSIDERATIONS: The director plans to cast as traditionally as possible and minding the time period the play is set in as well. Ages noted below are suggestive and if an actor can play the part, they will be considered. Additionally, the parts noted with physicality need to be able to BE PHYSICAL in the role both acting and minor fight choreography. Depending on audition turn out, we may consider a female for one of the officers.

WOMEN
Abby Brewster (Female 50-70 years old or able to play age) A darling lady, and the very model of Victorian charm and grace, who poisons elderly gentlemen, with her sister as an act of charity. She and her sister Martha seem to be the absolute embodiment of the values and polite society of a bygone age. More dominant, and a bit older than Martha, both ladies are happy, healthy, lucid, and spry. The Aunt to Teddy, Jonathan, and Mortimer.

Martha Brewster (Female 50-70 years old or able to Play age) Very sweet, but more submissive than Abby, Martha still is a strong woman. She and her sister have lived together for many, many years. Their personalities and pecking order around each other have been firmly rooted for eons. Always wears a high collar. The Aunt to Teddy, Jonathan, and Mortimer.

Elaine Harper (Female 25-40 years old or able to Play age) An Attractive girl, daughter of Rev. Dr. Harper, and Mortimer’s fiancée. She is surprisingly wise in the ways of the
world for a minister’s daughter. She is a little bit wily, sassy, and absolutely sharp (Actor seeking this role will need to show genuine zest and spunk. She will also need to display a wonderful sense of versatility.) We witness Elaine progress from casual happiness, to utter bliss, to twisted confusion, to stark fear, to godsend relief, and back to casual happiness again.

MEN
Mortimer Brewster (Male 30-50 years old or able to Play age) Nephew of Abby and Martha, brother to both Teddy and Jonathan Brewster. A very likable, Mortimer is a drama critic who is in love with, & engaged to Elaine Harper. A good-hearted cynic who is about to have his world turned upside down. PHYSICAL ROLE. Special Note: The actor who plays this role must be comfortable to utterly “LET GO.” Mortimer controls the show. From the discovery of the first body, Mortimer must be electrified. He carries that energy all the way through the show. Physical comedy, perfection of timing in dialog delivery, likability in presence, andan ability to display agility in navigating the rapidly changing circumstances of each scene, absolutely necessary.

Teddy Brewster (40-60 years old or able to Play age) Very likable, kindhearted brother to Mortimer and Jonathan, Nephew of Abby and Martha Brewster, Teddy is a man who believes that he is the 26th President of the United States, Theodore Roosevelt. Extreme dedication and energy is necessary while charging up a flight of stairs and screaming “CHARGE!” PHYSICAL ROLE.

Jonathan Brewster (40-60 years old or able to Play age) Nephew of Abby and Martha Brewster, brother to Teddy and Mortimer. Jonathan is a psychopath who has numerous murders to his credit and no scruples whatsoever. He is creepy. Jonathan is a killer, that loves his business and he’s got an unbelievably short temper. Dr. Einstein has changed Jonathan’s face three times, currently resulting in a Boris Karloff resemblance (to which he is a bit sensitive.) Some PHYSICAL work.

Dr. Einstein (45-55 years old or able to Play age) A German plastic surgeon, with an accent to prove it. Right hand to Jonathan, Dr. Einstein is mousey and submissive to Jonathan. Einstein should be viewed as a good guy whose life has gone bad. The audience truly has to sympathize with this guy. With somewhat of a ratty appearance, his face wears the benevolent smirk of a man who lives in a pleasant haze of alcohol.

The Reverend Dr. Harper (50-70 years old or able to Play age) (Cameo) We only see Elaine Harper’s father in the opening scene; a doctor of divinity, and the minister to the church next door to the Brewster house. The Brewster sisters have seen many ministers come and go over the years, but they seem to be particularly fond of Dr. Harper and vice versa. The actor portraying Dr. Harper should display a sense of polish, refinement, and  mild mannered sensitivity towards others. He is not in favor of Mortimer and Elaine’s relationship.

Officer Brophy (25-45 years old or able to Play age) (Cameo) The first police officer we meet in the show, Brophy is a thoroughly likable sort of fellow. Is making his rounds collecting Christmas toys for the needy. Some PHYSICAL work.

Officer O’Hara (any age) (Cameo) He is the quintessential example of an Irish-American police officer: Full of life, good natured and played big. He is on very good terms with the Aunts. O’Hara is a would-be playwright, and needs to plainly display the nagging, persistent drive that’s kindled within him once he discovers that Mortimer is a famous dramatic critic. Well intentioned, O’Hara really doesn’t mean to come across as annoying as he does.

Mr. Gibbs (55-80 years old or able to Play age) (Cameo) An elderly gentleman who wishes to rent a room from the Brewster sisters; and nearly falls victim to the sisters “charity”. He is a little gruff, but he warms up fairly quickly upon being offered a treat he hasn’t had since he was a child. 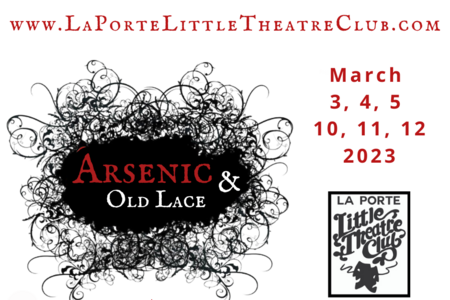